Back in December 2007, Elder M. Russell Ballard of the Church of Jesus Christ of Latter-day Saints gave a commencement address at BYU-Hawaii in which he encouraged members to use the Internet to share the Gospel of Jesus Christ with their friends and others around the world.

That was a significant departure from the previous tack of the Church being the sole online source of “official” information. We produced the wordle below of his now famous talk.

The wordle below is considerably larger than wordles of his talk we previously posted. 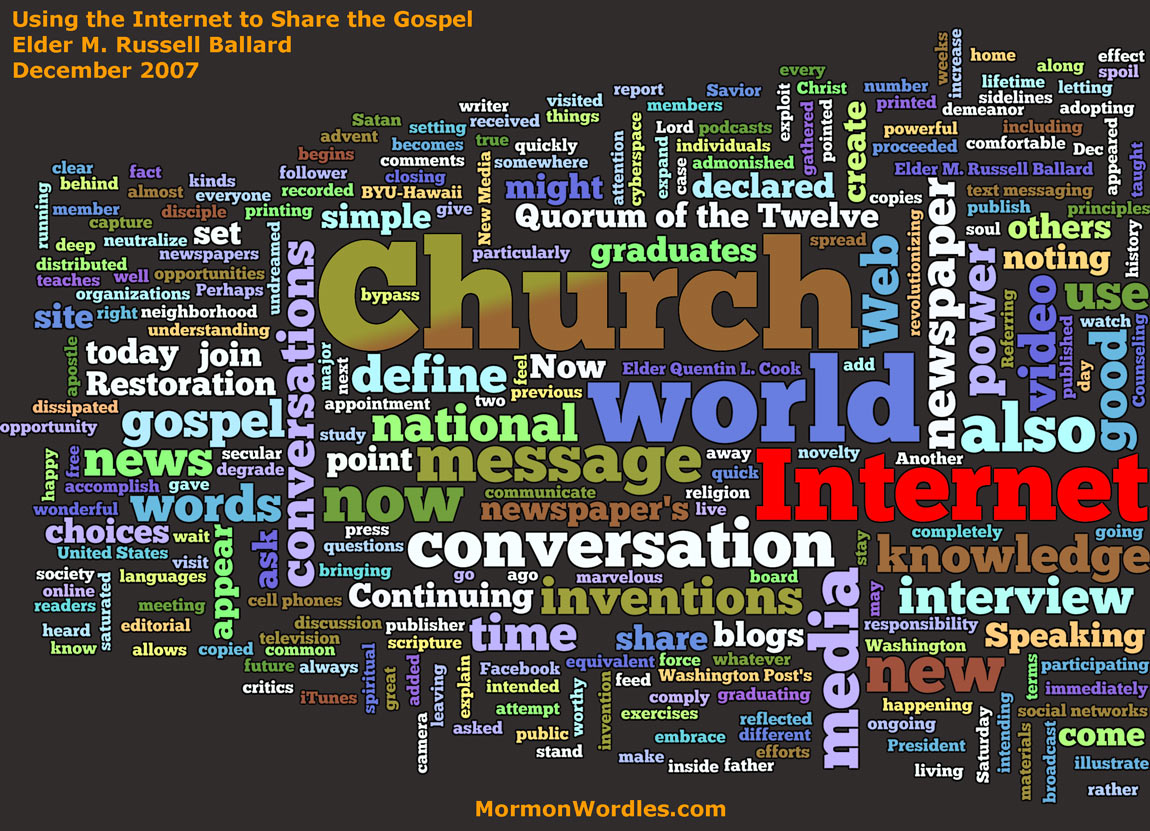 Elder Ballard's Message on Use of the Internet Wordle

Below are some materials from our original post of this wordle on Mormon Wordles dot Com.

Graduates Urged to Use New Medium of the Internet to Share the Gospel
Church News
December 22, 2007
Elder M. Russell Ballard 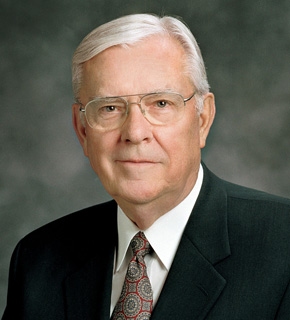 Elder M. Russell Ballard leads the effort encouraging members of the Church of Jesus Christ of Latter Day Saints to actively share the Gospel online. The program was launched in his December 2007 BYU-Hawaii commencement address.

He called the Internet the modern day equivalent of the printing press and recognized a member running for president (Mitt Romney) had brought about a “national conversation” about the Church in the media. Elder Ballard urged the graduates and other students there to join in that conversation via the Internet.

Later in his speech, Elder Ballard said, “Words create conversation, and conversations create understanding … In many cases, it is with words that you will accomplish the great things you will now set out to do.”

We find that statement particularly relevant to wordles. Words create conversations leading to understanding. We hope our Mormon Wordles do the same.

I was shocked by Elder Ballard’s December 2007 message. I still recall talking to my wife about it. The Church had historically wanted to be the sole online source of LDS information and tried to reel others back in. I recalled how several years earlier I had created a website for our stake that was days from launch when the Church issued the March 15, 2001 letter banning all local unit websites and announcing they were working on a policy for them (now hosted on LDS.org).

Later, I was a Ward Webmaster and sometimes frustrated with the lack of freedom we had to design the site, add links, and other options. Now, Elder Ballard pops us and starts urging us to write about the Church online as individual members. It took me a while to recover. Now, a few years later, I find myself entering the fray as Mormon Wordles.

When I started this post, I thought Elder Ballard would probably be viewed as a hero by most LDS bloggers, but when I thought about how fast things move in Internet time, I suspect many late coming LDS bloggers may not be aware of his role in urging members online.

For those looking for a little more history of Elder Ballard’s involvement in the movement, we provide a few more references.

The original BYU-Hawaii address is on video at the bottom of this post.
His BYU-Hawaii address was reiterated in BYU-Idaho’s April 2008 commencement address.
The original BYU-Hawaii address was further enhanced and reprinted in the July 2008 Ensign article titled, Sharing the Gospel Using the Internet.
Guidelines and Helps for Latter-Day Saints Participating in Online Conversations About the Church came about from his efforts.
He took up his own challenge in October 2007 by responding to a set of frequently asked questions about the Church in a series of video clips released during an online news conference with religious writers from many newspapers around the country.

We created a Mormon Wordle of Elder Ballard’s groundbreaking December 2007 message encouraging members to use the Internet to share the Gospel. We were able to do some “blending” on the word “Church”, brightly color the word “Internet” and give a a bit of a “poster” feel to the image. We also removed the phrase “Elder Ballard” which was used so many times to quote him in the text, his name overwhelmed our first wordle. His full name is still in there, along with Elder Quinton L. Cook’s if you look a while.

This wordle’s strong use of colors and effects forced us to reduce its overall size to keep download times reasonable.

Thank you Elder Ballard for ushering in the age of members sharing the Gospel online.