Genesis Chapter 1
In the beginning …

I especially like the creation of the animals, the great wales, winged fowl, cattle, creeping thing, beasts of the earth, fish of the sea and the fowls of the air. All those animals beginning to find their way around would have been wonderful to have seen.

Many in the world today no longer believe in creation. We need to stand by our faith and remember we are sons and daughters of our Heavenly Father, and were created in the image of God.

With water and light being abundant in the Genesis account of the creation, we elected to provide a Mormon Wordle reminiscent of the waters at creation.

Those who look closely might like to try to pick out the six days (“first day”, “second day”, “third day”, etc).

We continue to be fascinated by zooms of these Mormon Wordles and are supplying a download jpg enlargement of a portion of the Genesis Chapter 1 wordle above. Its about a 300 kb file centered on the word “God”.

Shortly later we made another attempt at wordling this text as shown below.

Genesis Chapter 1
Let there be light

I love this history of the creation of the earth provided by the Bible in the first book of the Old Testament.

“In the beginning God created the heaven and the earth. And the earth was without form and void: and darkness was upon the face of the waters. And God said, Let there be light: and there was light.” 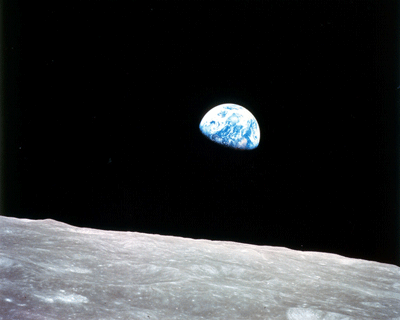 The same mission brought us the well known Apollo 8 Earthrise photo. Their image of the earth rising over a lunar horizon had a tremendous emotional impact on the world as we saw our planet from a new perspective.

The earthrise image together with their reading of the first chapter of Genesis gave the world a much needed spiritual boost. Sometimes, I wish we could recapture our feelings from that time, and try to go forward now as a better people.

We reworked some of the materials we used in preparing our earlier Mormon Wordle of Genesis Chapter 1 to created a lighted version. We widened the frame a bit, slightly changed the color schemes, lighted it using Photoshop Elements 8, then saved it as a PNG image to try to keep some of that brightness we see on our Mac for our PC visitors. We think the light blends well with the scriptural account of the creation of the earth.

The lighted Mormon Wordle of Genesis Chapter 1 is below. 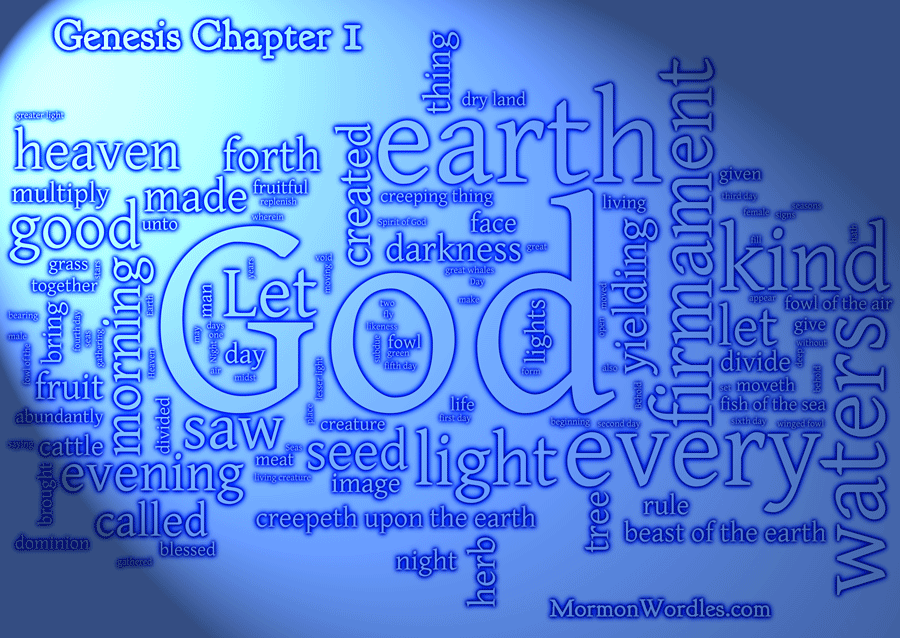 We welcome your comments, but please no bashing creationism.

The text and wordles above were originally hosted on our Mormon Wordles dot Com site. We moved them here in early 2017.