A branch of our family was aware their family had been members of the Church of Jesus Christ of Latter-day Saints a long time, but were not aware that any of their ancestors had actually came west as part of the Mormon Trail (1846-1868). Looking on new.FamilySearch.org one day, we noticed a lady in their ancestry, Carmellia Mariah Burgess, was born in 1844 in Nauvoo Illinois. We began to wonder if this young girl made the journey on the Mormon Trail and what had become of her. 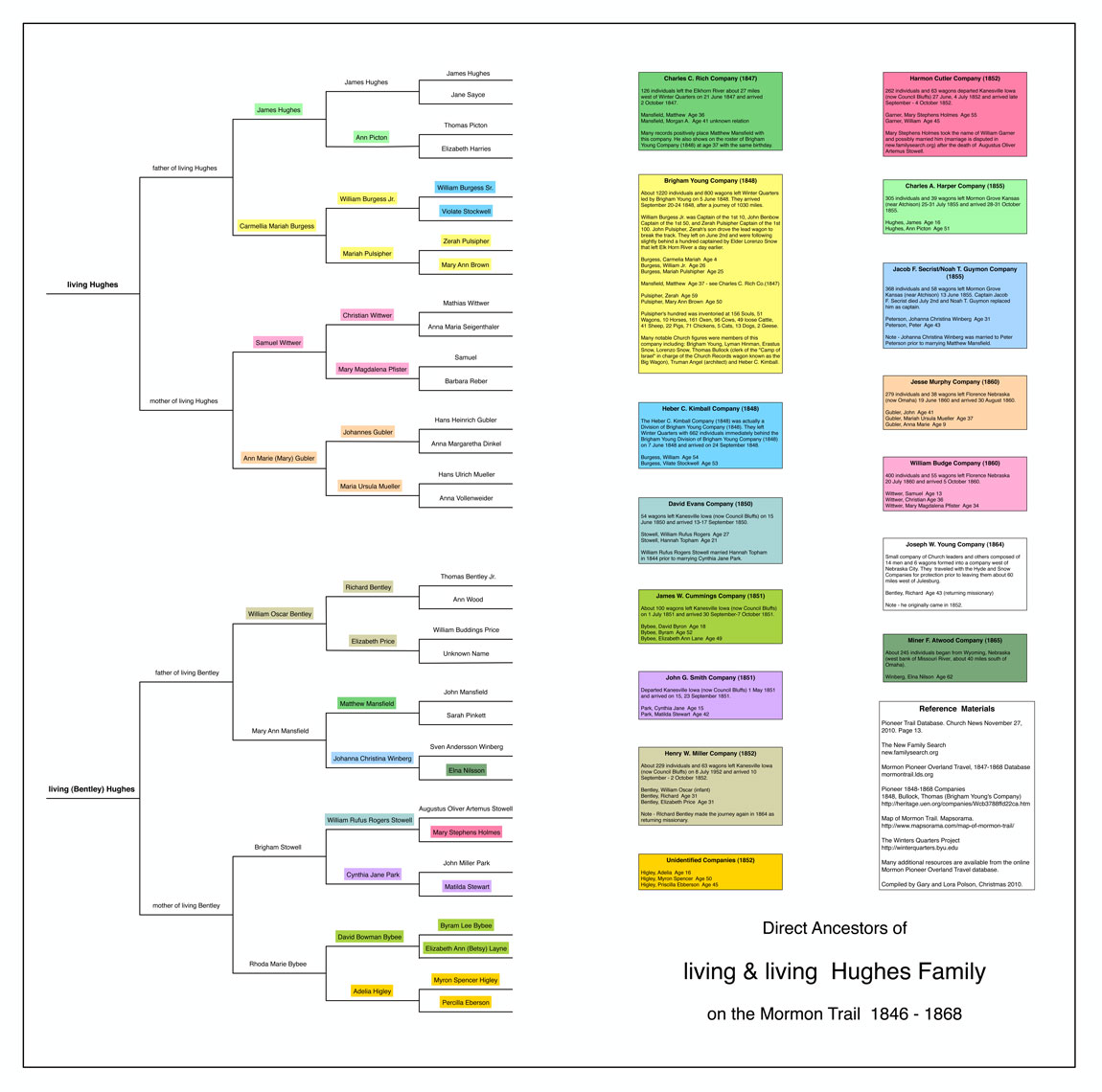 Their ancestors quickly came to life using data already entered in New Family Search in combination with the Mormon Trail Database. We began rapidly finding families and the Companies (groups) they came west in. Many of the Companies also have a brief history of their journey. We verified the individuals by checking birth dates in New Family Search against birth dates in the Mormon Trail Database.

We were rapidly saturated with information and turned to creating a genealogy chart to display our findings. A traditional pedigree chart was used on the left with individuals that came west on the Mormon Trail color coded as to which Company they came west in. Then on the right, Companies were correspondingly color coded, family members in them, and a brief summary of their trip were also provided.

As it was very near Christmas, we put some additional materials together about the Mormon Trail in general, as well a collection of several historical records we found of family members writing about their trip west or others writing about them, and presented our findings at a family Christmas dinner.

For privacy reasons, we refer to the family members still living as “living” in the version we are posting online instead of by name. Plus we left their parents unnamed as well.

We printed off a large version of the Mormon Trail Genealogy Chart at Kinkos and it showed at the Christmas Dinner (actually we printed off a black and white version and colored coded it with colored markers to save money). If anybody is interested in replicating this work for a pioneer family, it is quite easy using the references listed in the lower right corner of the chart (if your family genealogy is already entered in Family Search). We did it on a mac with a large monitor using OmniGraffle Pro, but I am sure it could be done in several other programs as well. It only took us a couple days to put the entire package together. The most difficult part was figuring out the pedigree chart spacing (the chart is composed of a number of short sticks).

Among the more interesting stories were, at least one family member made the trip twice, several were captains of groups within the Companies, some drove the lead wagons, several (including Carmellia and her family) were in Brigham Young’s 1848 Company along with Thomas Bullock (the Church Clerk). Thomas Bullock was traveling with a wagon full of Church records and kept very detailed records of that passage. Having served as all kinds of clerks for many years, I found it interesting to read of Thomas Bullock’s journey and methods of keeping and protecting the Lord’s records, and that he had traveled west with part of our family. Online, we found a portion of a journal and biography of John Pulsipher (one of Carmellia’s father’s brothers that also traveled with them). It provides some great stories of buffalo, wolves, strong winds, meeting some remnants of the Mormon Battalion, passing major landmarks along the way, variety in the landscape, stopping a few moments to repair someone’s arm that broke when they fell from a wagon at Echo Canyon then quickly moving on, and of Carmellia’s mother giving birth to a baby boy on the trail. You can also sense a great reverence for their leaders and their God in many of their writings.

Since last Christmas we have learned some other pretty interesting things about this family, but we are saving those for Thanksgiving dinner this year.