This post is part 2 of a three part post telling the story of a quest to extend a family line beyond a dead end. My search for the parents of William G. Polson / Polston lasted for over 3 decades. 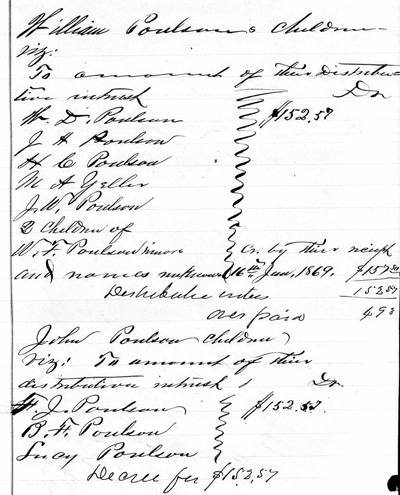 The document that changed everything, the rosetta stone.

Part 1, The Prologue, tells of the three decades of effort trying to get past a dead end in my Polson family line.

This part covers the discovery of a document that immediately answered many of my long held questions and significantly extended my Polson family line.

In addition to the efforts mentioned earlier, I continued to fire up the computer and search on FamilySearch and on Ancestry every month or two trying to find the parents of William G. Polson, but kept coming up blank.

THEN in September 2015 I found the Jackson County Alabama probate documents for the William Polson / Poulton I mentioned earlier as the possible father of my William G. Polson. His probate records were on Ancestry.com. I was elated, screen captured them, and studied them with much excitement. While I found many names I had seen before in connection with William Polson / Poulton’s family, the only name I found outside those was that of Mary H. Polson that married Josiah Norwood. She was already on my list of questions I had been trying to figure out for decades. This gave me no new answers, plus it was frustrating trying to figure out the relationships between the names mentioned in the probate court documents. One of them was a William Polson Jr. that might be my William G. Polson, but I was still left with no proof.

The Jackson County Alabama probate records for William Polson / Polston/ Poulton showed his estate being probated shorty after the end of the Civil War. They even had the court sign off on allowing the executors to rent out his property a year or two til land properties recovered after the war before they sold his land. Some records indicate he died in 1842. His estate may not have been probated til the death of his wife, Lucy.

I kept returning to this William Polson’s Jackson County Alabama’s probate documents, repeatedly studying them and repeatedly being frustrated.

Tuesday 23 August 2016 (almost a full year after finding the William Polson / Pouton probate documents, I showed them to a Church of Jesus Christ of Latter-day Saints (Mormon) Family History Consultant in Stillwater Oklahoma. He said the Church had been promoting the idea of searching by location (geographical areas) and by collection (certain collections of records). He gave me a paper copy of a FamilySearch post saying about 70 percent of the available digitized records on FamilySearch are only available by searching in that manner.

Late afternoon and early evening of Thursday 25 August 2016 I had an opportunity to apply the methods suggested above. I tried the approach for an hour or two. Then I drifted over to Ancestry.com again searching state probate records for Polson’s (an extension of the Family History consultant’s suggestion to search by location and by collection). I searched probate records in some of the states I often found my Polson’s in (OK,KS,AR,TN,MO) and then I tried Alabama. I almost instantly found the Probate record for Lucy Polson, wife of William Polson / Poulton whose probate records I had found earlier. 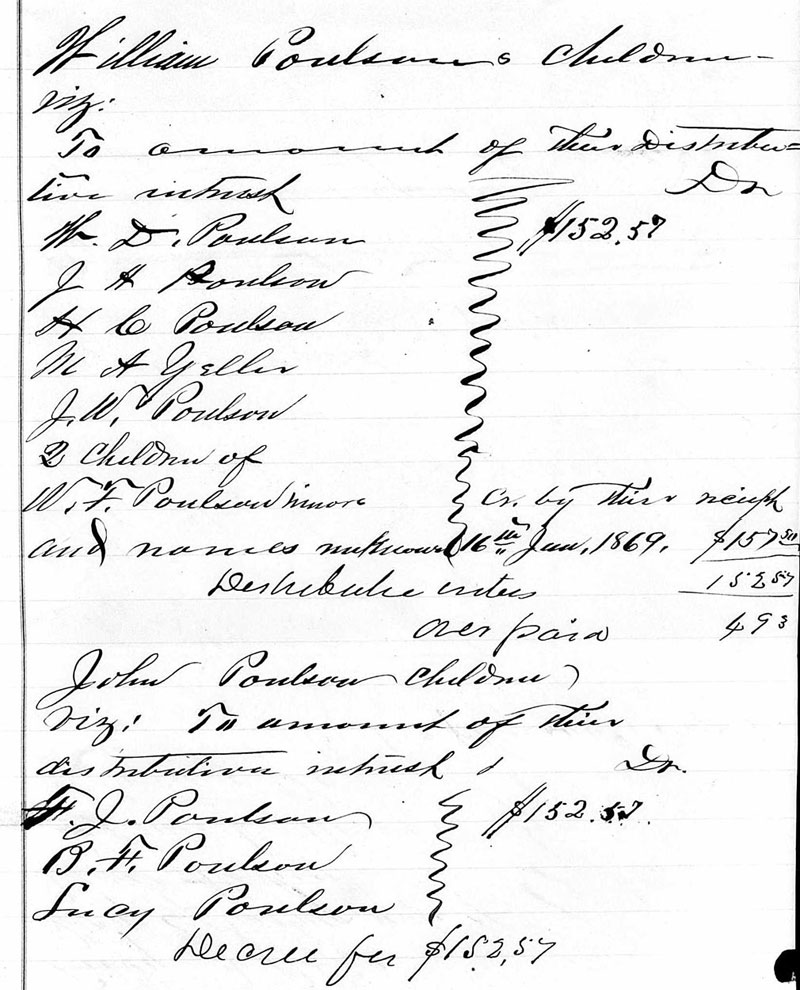 A labeled version is below. 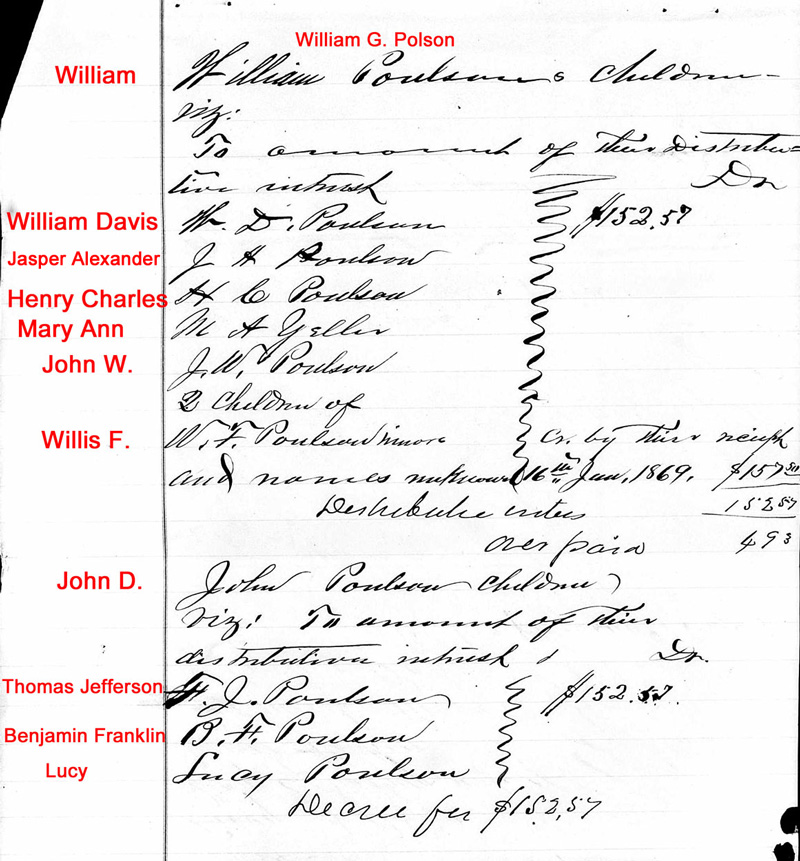 The Find was far greater than just the parents of William G. Polson

When taken in conjunction with the William Polson, Jackson County Alabama probate documents file folder shown below, far more than just the parents of my William G. Polson are revealed. 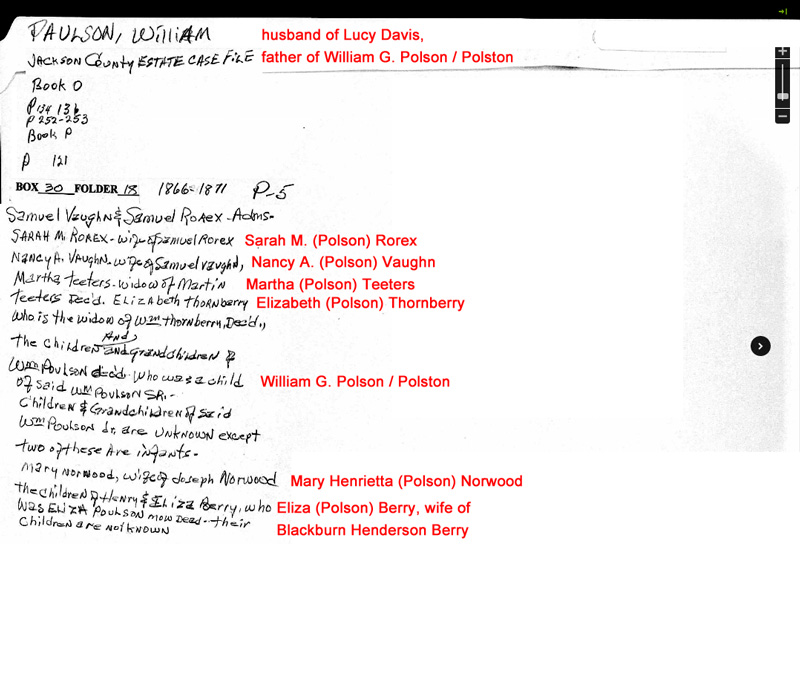 The findings cited above are further confirmed by court notes on Lucy Polson’s probate documents file folder and more solidly by the many documents contained within that folder. 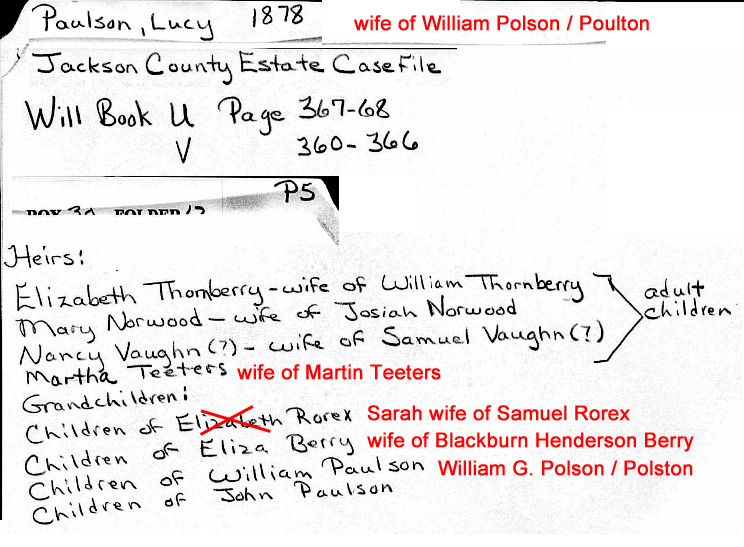 The Lucy Polson entire probate document and the two file folders above are available on Ancestry.com. Both folders, Lucy’s especially contains a wealth of additional information on my newfound Polson ancestors. If you have access to Ancestry, you can find them by searching Alabama, Wills and Probate Records 1753-1999 for “Paulson” (note the spelling I provided). Then select the entry for Lucy Paulson 14 Sep 1878 Jackson County.

William Polson’s records are in the same database, but they are not indexed. If you go back to the database entry for Lucy Paulson 14 Sep 1878 Jackson County, and select the “Account Papers” link to the far right, then advance a couple pages you will see William Polson’s probate records.

Now we can finally write William and Lucy into the pedigree chart.

Doesn’t that look nice after being blank for over 30 years?

What happened after the find?

Well there it is, a three decade long search was brought to close in seconds. I am still reeling from all this. Part three of this series, titled the Epilogue, reveals some related things found since the big find, some new questions, and thanks the many people who helped along the way.

Links to the other 2 posts